Is solar geoengineering the solution to fight climate change? 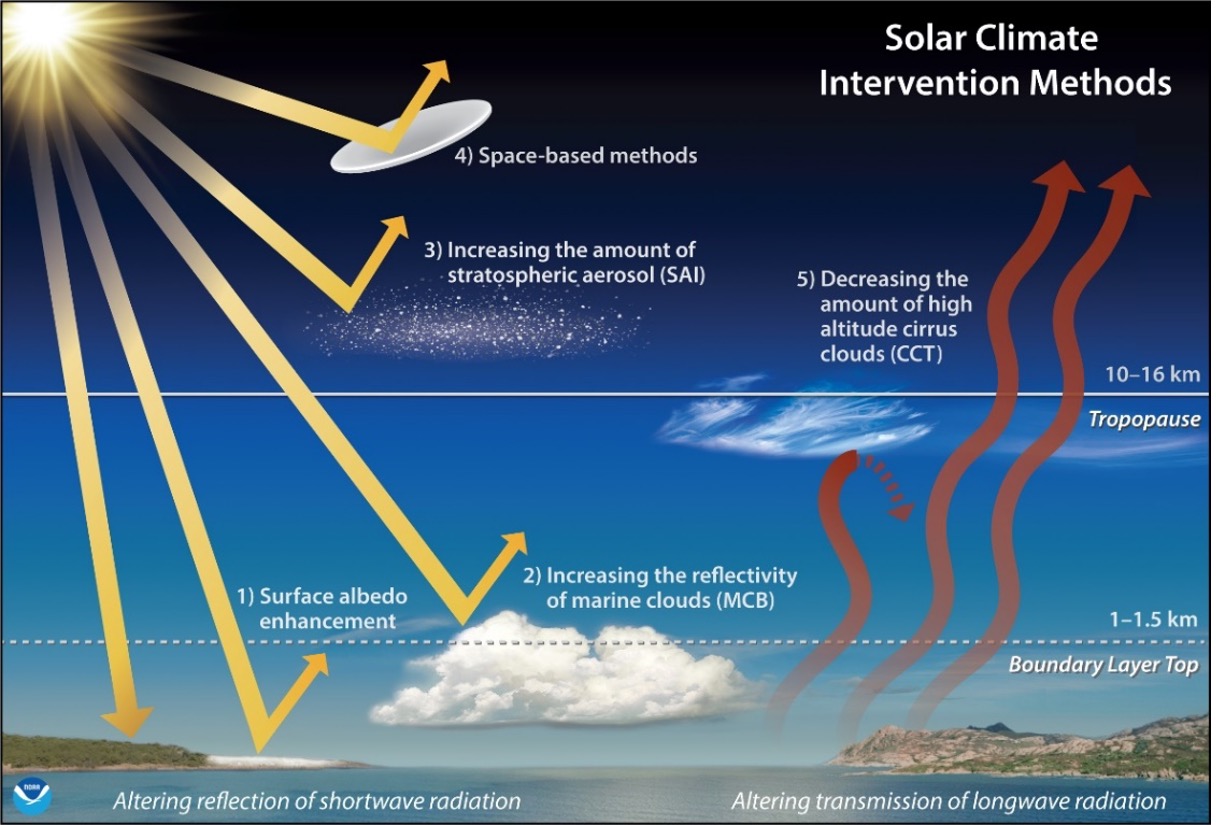 We need to act now!

Climate change is undeniably the biggest challengehumanity faces today, and it is impossible to deny the huge part we play in it.As the IPCC reiterated in their 6th assessment report last August, immediateactions are needed to drastically reduce our greenhouse gases emissions. Wehave no other choice if we want to meet the Paris Agreement target (limit theincrease of global temperature below 1.5-2°C). [1] Unfortunately, it seems thatmost governments are reluctant to take the necessary steps. The COP26 hasproved us once again that fossil fuels are still ruling our economy and continueslowing down the path to carbon neutrality. But what if there existed asolution allowing us to never talk about emission reduction ever again? What ifa plan so massive in scale could undo what our destructive behaviors have beencausing for years? Experts and media have been debating about this incredible yetvery controversial solution. Solar geoengineering.

Geoengineering is the deliberate interventionin the Earth's climate system.It literally means using human made technologies to control the climate. Itdoes sound hubristic. In a way, we’ve been practicing geoengineering fordecades by purposefully emitting greenhouse gases in the atmosphere, thuswarming the earth. Scientists have been leading projects designed to fightclimate change, categorized in two subcategories: solar radiation management (“SRM”),often called solar geoengineering, and carbon dioxide removal (“CDR”). Geoengineering projects vary from highlytechnological, like the CDR ocean fertilization, to actually feasible with ourcurrent capacities. It’s the case for the SRM stratospheric sulfur injection(one of the possible solar climate intervention methods, shown as method 3 onfigure 1). If you haven’t heard of this topic before, it will probably be thecase in the years to come. And why is that? Because some experts thinkthat it could see the light in our generation. [2] [3]

How does it work? Theoretically, it’s very simple:we inject sulfur dioxide in the atmosphere, where combined with water vapor, it’stransformed into sulfur aerosol. These small droplets can then reflect some ofthe solar radiations. It’s actually inspired from a very natural phenomena:volcanoes’ eruptions. In 1991 occurred the second largest eruption of the XXthcentury, the Mont Pinatubo’s (in the Philippines). It blasted so many volcanic aerosols(among which 17 Mt of SO2) that approximatively 1% of the sunlight wasprevented to reach the terrestrial ground. This of course massively impacted theEarth’s climate, resulting in a global drop of temperature of 0.4°C (even morein the Northern Hemisphere). The effects were felt for more than two years. [4]

The reason why it’s such a famous topic todayis because experts think we have all the tools necessary to implement this new technology.A study jointly led by Harvard and Yale predicted a way to its achievement: asmall fleet of specialized aircrafts would conduct up to 60.000 flights a year toinject sulfur dioxide in the stratosphere (the upper layer of the atmosphere),at approximately 20 km from the ground. After 15 years, the planet would cooldown by 0.3°C. It seems to be an efficient short-term solution. So why is it socontroversial? [5]

Why is it not a good idea?

Solar geoengineering partisans are often the mostreluctant. Although it seems like the solution everyone has been waiting for,it could make everything worse.

First and foremost, it doesn’t incite societiesto reduce their greenhouse gases emissions. Companies and governments unwillingto lower their carbon footprint (generally benefitting from fossil fuels lobby)could use it as an excuse to never switch to a carbon neutral economy. In fact,we could simultaneously use atmospheric sulfur injection and keep combustingfossil fuels. According to some scientists, it should be considered nothingmore than a cheap short-term option. By implementing this technology, for adecade or two, it could buy us some time while we work on dramatically reducingour emission (for example, by using CDR carbon capture and utilizationtechnologies). The latter is more expensive, but it could be a long-termsolution, as it means reducing our emissions (and not delaying them). For DavidKeith, one of the best advocates of geoengineering, solar engineering couldnever substitute emissions reduction, but only be a supplement.

Furthermore, if for any reason solargeoengineering were unexpectedly stopped, the temperature would probably increasefaster than ever seen before (assuming greenhouse gases emissions wouldn’t bereduced). The shock would be severely violent, generating a rapid climatechange leading to the destruction of vast ecosystems. Is this a risk worthtaking? [6]

In order to have a global effect, allgovernment authorities would have to be on board. Yet, we have seen thestruggle this represents with the Paris Agreement (still not ratified by allcountries as of today). Thus, as long as every party doesn’t understand theclimate emergency we are facing, it is highly unlikely to happen. At the last UNEnvironment Assembly, Switzerland introduced a resolution on geoengineering, whichwas blocked by the United States and Saudi Arabia, among others. If suchdisagreements occur in today’s global committees, we can already imagine theinternational turmoil that the implementation of these large-scale projectswould cause. [7]

Finally, the knowledge experts have acquired onthe topic is based on simulations or small-scale lab experiments. MountPinatubo’s 1991 eruption disrupted rainfall patterns (negatively affecting theagriculture in vast parts of the world). What would be the impact if we replicatedthe phenomena at a global scale? We can’t predict the outcome with an absolute certainty.Climate affects every species on our planet. Disturbing it would generatedevasting consequences.

Solar geoengineering is not a solution toclimate change, mainly because it doesn’t incite to reduce carbon emissions. Consequently,we can expect fossil fuels lobbyists to push for its implementation. Others willadvocate for it as well, but with a different target. The Paris Agreement arestill heavily debated, half a decade after its signature. After years ofdiscussions and still no concrete action, scientists are pushed to considerradical measures. It would be unconscious to not do research on alternatives. Hopefully,solar geoengineering and the governance issues it implies won’t ever become areality. But if we ever find ourselves in an impasse, wouldn’t it be better ifresearch had been conducted prior?

[2] What is geoengineering – and why should youcare?

[4] The Atmospheric Impact of the1991 Mount Pinatubo Eruption.